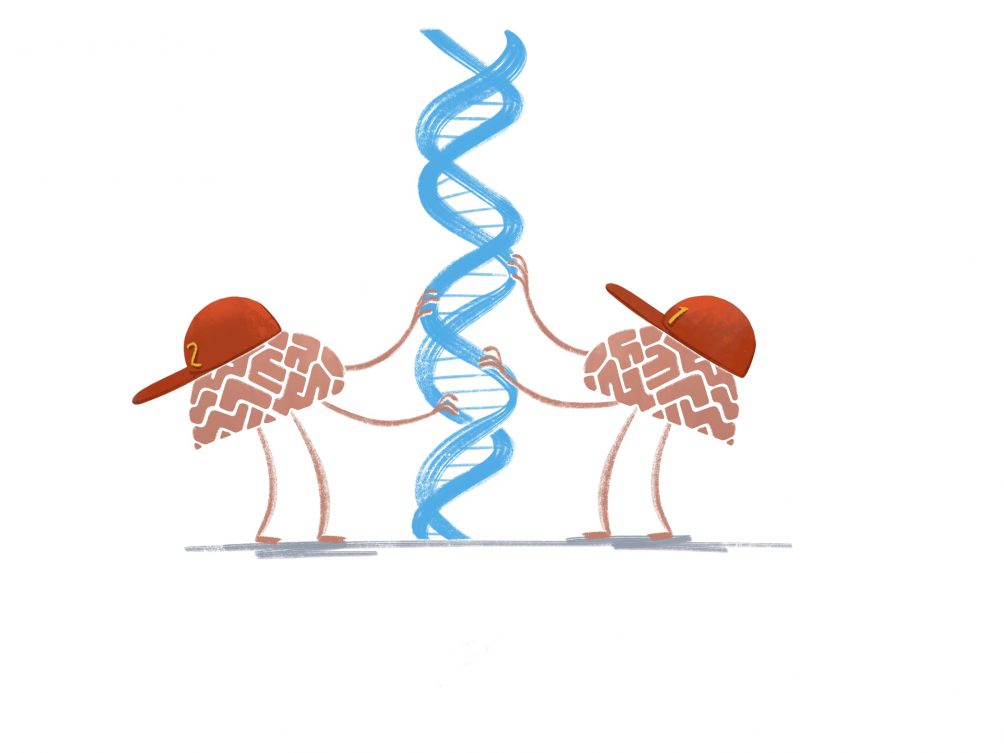 Your genes and your surroundings, your upbringing, what you have learnt shape who you now are1. But it is not possible to accurately predict what this interplay of nature and nurture will bring about2. How does who you now are arise from your genes? How are all your characteristics- appearance, behaviour, lung capacity, way of thinking, motor functioning, belief, digestion – related to your DNA? At conception, the egg and sperm fuse to form one cell. This then divides: two cells, four, eight……in the course of time to millions, billions. Thus, a child is formed. But sometimes the first two cells do not stay together, but go on separately to divide further. You then have monozygotic twins who share exactly the same genes and DNA. Despite this, monozygotic twins do not resemble each other fully. Their height may for instance differ. And cognitive characteristics differ even more widely.

Impact of the environment

The differences between monozygotic twins are attributed to differences in their environment while growing up. Environment here refers to everything which you come into contact with: upbringing, illnesses, parties, feelings of security, adventures, almost everything. But the question remains whether this explains the differences between these twins. You can find this out by comparing pairs of identical twins who have been brought up together or separately. The difference in IQ, BMI, personality traits, sexual orientation, autism between individual twins of the same pair turns out to be the same on average regardless of whether they were separated or not. Therefore, growing up in a different family does not make the twins differ more from each other. This means that the environment cannot have played a major role. The question is, where then does the difference between the monozygotic twins come from if it is not from the genes and not from the environment.

The answer is: chance! This can be very well illustrated by Barack Obama’s face. His face is highly asymmetrical. Look at figure 1. It shows how different the left and right halves are. The genes which determine the formation of his face are the same, so this is does not explain the asymmetry. Now you may think that a blow to his right cheek ( or his left?) which he may have had in his youth would explain the difference. But this is not the case. It is chance.

That chance is very difficult to understand. You think: there must be a cause, even a small one. But that is not so. It goes roughly as follows.

In figure 2 you see a version of a marble run, which is exactly the same in A and B. If you release a marble at the top of the hill exactly in the middle, then the marble will sometimes roll down the left and sometimes the right side, and a little further on, when it encounters the next hill, the same unpredictable event happens : sometimes to the right and sometimes to the left. In complex dynamic systems there is always some static, that is irregular variation. You can picture that as instability in the structure of the marble run, the surface vibrating slightly. Therefore it is never certain how your genes will express themselves. And a small variation can have large consequences

Sometimes chance is the cause

You may think this is a scientist’s way of indulging in navel-gazing. But it has important practical applications. If your child has autism or ADHD, then his genes3, the surroundings, his upbringing, all play a role in this, but it can also be pure chance. And people who get cancer often ask themselves, “ Why me?”. The answer may be: chance, bad luck, even if you have had a healthy lifestyle. And it can also be chance even if you have had an unhealthy lifestyle. These days you can have your DNA tested to determine your risk for particular diseases. But that chance is uncertain for most diseases, because your DNA can go one way or another. And understanding why you have a particular characteristic is also difficult, because it is because of your genes and how you have been brought up, and …. chance. Gerard Weinberg said: “ Things are the way they are because they got that way”.