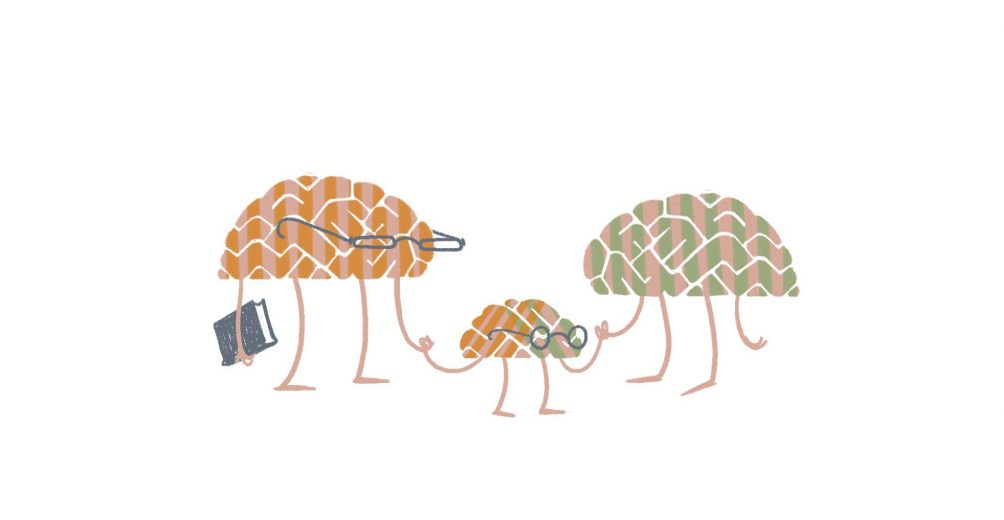 The probability of having autism is greater for an individual if it runs in their family. This suggests hereditary factors. But what do you actually inherit, and what are these hereditary factors? You inherit genes from your parents which are passed on through their sperm and ova. Is there really a gene for autism?

Genes are pieces of DNA which can be read off, or transcribed. The result of this transcription is a protein. These proteins have various functions as building elements, enzymes, and immune substances. Enzymes produce other substances, such as hormones, neurotransmitters, lipids. All these substances together form the building blocks for the body, including the brain. They facilitate digestion and energy supply, and the functioning of the brain. The brain in turn enables perception via the special senses, muscle control, memory, eating, reproduction, thinking, social behaviour. And when things go wrong with these latter functions of the brain, then that can manifest itself in autism.
I describe all this in order to make it clear that genes and autism lie quite far out from each other. There is no gene, or DNA sequence, that codes for autism. Why then did researchers start looking for an autism gene? This is because chance has misled us. More than thirty years ago THE gene that causes Huntington’s disease was discovered. Huntington’s disease is a disease of the brain, therefore an anomaly in just one gene can cause a brain disease. This led people to think that many more diseases, perhaps even all diseases, were each determined by one specific gene. The only question was, which gene was associated with which disease. In the intervening years it has become clear that Huntington’s disease is an exception. For other brain disorders such as autism, schizophrenia, depression, bipolar ( manic-depressive) disorder, ADHD, and dementia, hundreds of genes have been found which all play a role. ( See: The basis for most of the severe mental disorders is clear)

No two people with autism are quite the same

Although I have talked about autism as an entity, it is certainly not simply one specific syndrome, one collection of signs and symptoms always occurring together. Autism consists of a number of clinical signs and symptoms. Recognizable features of autism relate to communication problems, difficulty establishing contact with others, and repetitive body movements or behaviours1 A person does not have to have all these symptoms. The one may make repetitive movements, and the other have great difficulty in social communication, but not make repetitive movements. Each of these signs and symptoms can manifest itself in different ways. Communication problems, for instance, can consist of eccentric use of words or a lack of spontaneous speech. It seems obvious that a person with an eccentric use of words has inherited different genes than a person displaying repetitive movements. So far hundreds of genes have been discovered to play a role in autism. What do these genes do? Most of these genes play a role in cell growth in the brain, for instance for that of neurons.
Neurones have to develop in a foetus or young child at the right moment and in the right number, and then they have to make contact with other neurons in the right way. The basis for this growth is embedded in the genes, but what a child experiences also has a strong influence on this growth. All this can add up to a brain that is not fully developed in all aspects, and this can lead to the development of autism in a child. Autism is a disorder affecting the development of the brain in the first three years of life, when the brain grows fastest.

Hundreds of genes can play a role in autism. This explains why the symptoms of a child with autism can differ greatly from those of his parents, even though he may have inherited the autism from a parent. The parent may have 314 genes which contribute to the development of autism, but the child may have inherited just 125 of these. The growth of his brain has taken a different course to that of his parent’s.
The child may for instance show an eccentric use of words just like his parent, but not the repetitive behaviour patterns of the latter. What is more, the child’s autistic features may be identified earlier. If this is taken into consideration in the approach to the child during it’s upbringing, then this too can influence the growth of the brain, hopefully in a positive way.
The entity we call autism is therefore a constellation of characteristics that are passed on piecemeal and then manifested bit by piece. Just as is a child’s face. An aunt says, “ he looks like his father”. And then you get the detailed analysis. He has his father’s eye colour, the narrow lips and also the high forehead. But he has his mother’s sharp chin. The aunt does not mention the eyebrows, because these do not particularly resemble those of either parent, although this is mostly the case with other children. The structure of the whole face is determined by genes which you inherit from your parents. This is particularly visible for some facial features because of the resemblance, especially if the features are uncommon. The same is true for your personality, where the development also is determined for a part by the genes you inherit from your parents. This is clearly noticeable with particular personality traits, especially where it concerns the less common autistic traits.
Sometimes a child has a very severe form of autism. That can happen if, in addition to the genes that it may have inherited from its parent, the child also has other gene variants that the parent does not have. That may be a result of spontaneous gene mutations occurring after fertilisation, or even after birth. Or from a genetic abnormality in the father’s sperm cell. Such a genetic mutation or abnormal sperm cell is rare, but can be an important cause for severe forms of autism, especially if the father or other family members do not have autism at all.

What exactly do you inherit?

If a parent and a child have autistic traits, then they still do not have the same form of autism. Autism is hereditary, but you don’t inherit autism. What you inherit is a tendency for a specific development of your brain. This can have several forms and manifest itself in very different ways. Environmental factors, or what you experience while growing up, also have a strong influence. But chance also plays a role. (See Why are monozygotic twins not identical? Chance!)
Milder variants of autism can remain unnoticed for a long time. But is autism a handicap, a disorder, a disease? Severe forms of autism certainly are all of these. But in less severe forms, autistic traits can also have advantages, and some people with autism do not feel handicapped at all.

2 Comments on “Autism is hereditary, but you don’t inherit autism”