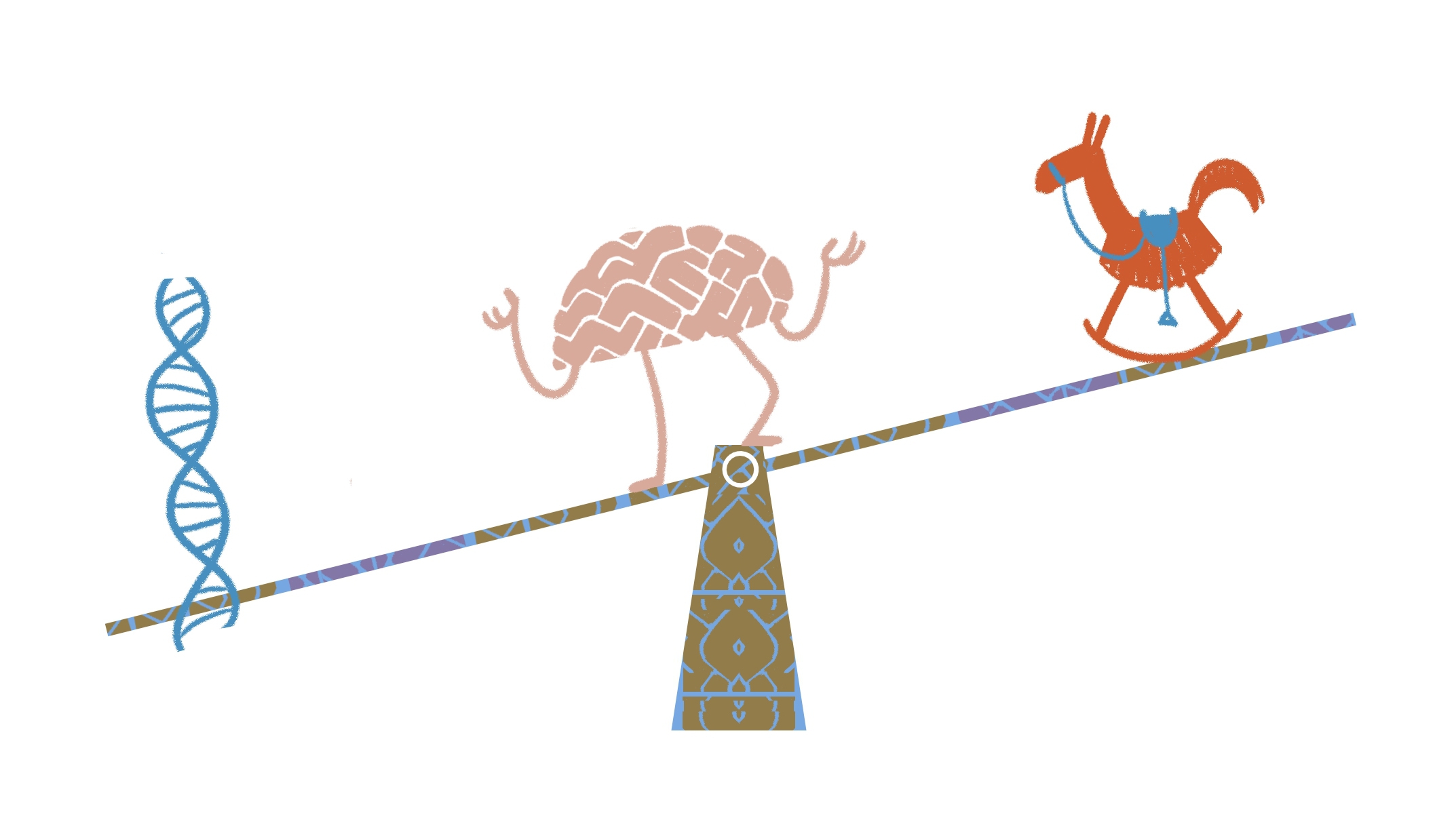 Conventional teaching tells us that our characteristics are laid down in our genes. Added to this, lifetime experiences and learning determine if we can fully develop and use these characteristics to our advantage. We refer to that which is determined beforehand as nature, and what we learn as nurture. In relation to the brain, this is sometimes called the hardware and the software. Genes determine the brain-hardware, the construction of the brain. The environmental conditions and what we learn determine which programmes can be run on the hardware, so this would be the software. But this analogy provides an outdated and incorrect picture. Whereas it was previously thought that one could distinguish nature from nurture, the subsequent progress in brain sciences has steadily blurred the boundary between nature and nurture.

Humans have approximately 22,000 genes. Other animals have nearly as many – and almost identical – genes. There are even some plants that have more genes than human beings. Human genes barely differ from the genes of monkeys and even from those of mice. The human brain however does differ significantly from that of a mouse or a monkey. This is therefore not only a result of differences in genes. And this also makes clear that genes are not the most important defining element in brain development. They are however a basic element, a sort of starting block. An error in a gene which is involved in brain formation can give rise to problems. Huntington’s disease is caused by a defect in a single gene. But that is an exception.
How does the process of brain development take place? It starts with the genes which code for enzymes. These enzymes make lipids, proteins and other substances which combine to form the cells of the brain1 Outside influences play a role in the development of the brain from a very early stage inside the uterus, when the foetus is still very small. Foodstuffs, hormones, other substances which come to the foetus via the mother, but also sound, can have an effect on the growth of the brain.

In the process of brain growth, it is not just the formation of certain brain cells, but how these brain cells are connected to each other that is of importance. The transmission of signals from one brain cell to the other is the basis of our thinking, feeling and acting. Brain cells or neurons branch in order to make contact with other neurons. Where the branches go to and where they make contact is controlled by growth factors. The growth factors are made on the basis of DNA, but where and to what extent this takes place is determined by environmental conditions. Therefore DNA – nature – and environmental conditions – nurture – are interconnected. How can environmental conditions determine where and how much growth factor is produced? Neurons that are active and have active contacts with other neurons produce more growth factor. And the activity of those neurons and of the contacts arises from signals which enter the brain. In this manner, what you experience by way of your special senses affects the growth of your brain2. This growth is however limited by the possibilities embedded in your DNA. Most psychiatric disorders are partially caused by DNA variations which lead to reduced, mistimed or misplaced production of growth factors. This is certainly true for development disorders such as ADHD and autism spectrum disorders where suboptimal functioning begins in childhood, but also for anxiety disorders, depression and schizophrenia. This may explain the hereditary component, but also that lifetime experiences partially determine if someone with genetic predisposition indeed manifests the disorder or is spared. The same principle also applies for disorders such as Alzheimer’s disease which manifest much later.

The growth of the brain, as I described earlier, is fastest just after birth and slows down with age. A newborn’s brain has only a third of its adult volume, and it grows to almost full size in the first three years. This is, for instance, related to the fact that you can only speak a language as fluently as a native if you learnt it before you turned seven. The language centres in your brain grow fastest till that time. The growth is determined by DNA, that is aptitude, which is nature, but also by being exposed to language, nurture. The language centres grow less and the connections between the language centres are less in number and efficiency if a child is less exposed to language. Talking to babies and with toddlers is important for their language functions to develop well. There are windows of opportunity for different functions in which environmental conditions can most easily or efficiently affect the growth of the brain. In those periods the relevant skills are most easily learnt and consolidated3.
After a child’s third year the brain does not grow much in size. But this is not to say that the process of branching out and laying connections between neurons comes to a halt. Laying down experiences and learning continue throughout the lifetime, and this means that neurons grow new branches and make contact with other neurons. You can say that the growth of the brain is identical to the laying down of experiences and learning. Growth of the brain refers here not only to an increase in volume, but also to changes in interneuron contacts.

For everything that we can learn, for all our functions, it is never nature OR nurture. In the developing brain, the contributions of hereditary and environmental factors can never be seen separately. The brains are formed by molecular and cellular processes which are continuously being influenced by the surroundings4. And what we pick up and learn from our surroundings is constantly being influenced and limited by the molecular and cellular processes. The question of whether something is nature OR nurture is a non-starter. It is always nature AND nurture.