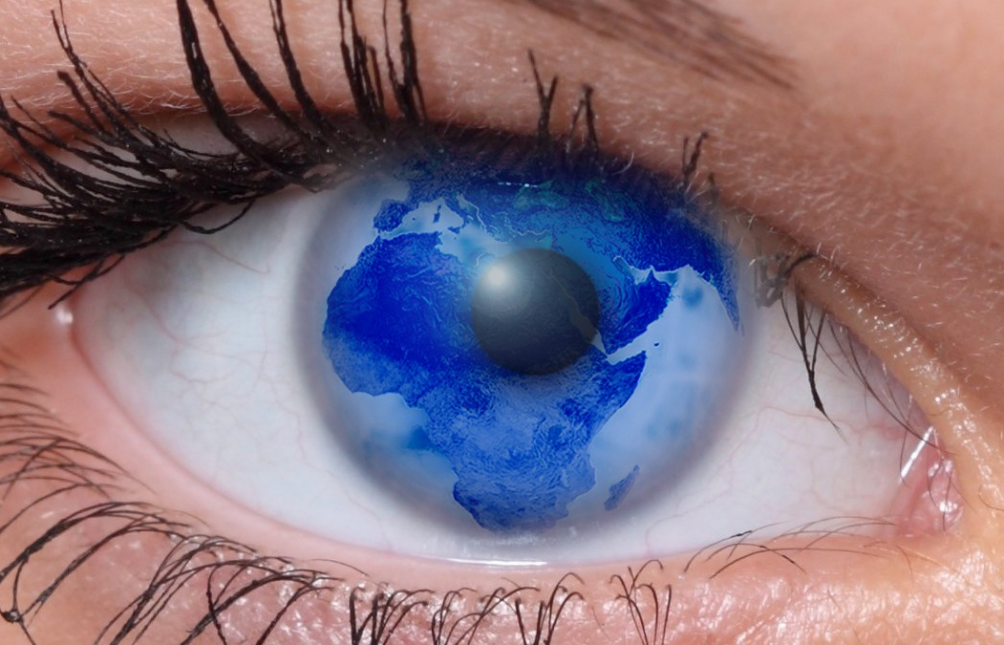 I seem to have misplaced my iPhone. It is not in my pocket or on the charger. I mentally retrace my steps through the house: the bedroom, living room and the kitchen. But I cannot, with my mind’s eye, see myself laying it down in any of these places. I then recall that I have a USB port in my new car, where I sometimes plug my phone in to charge. I hurry to my car, and indeed, there it lies. This search takes place largely inside my head, looking with my mind’s eye. It goes much the same way with my memories. They are often played out like a sort of film in my head, as described in Remembering an event changes your memory. How does it work if you see with your mind’s eye? Are there visual signals? They do not at any rate enter through the eyes.

Looking with your eyes

When you look, signals are sent through your eyes to the primary visual cortex, right at the back of your brain (Fig. 1). From here, they are transmitted progressively further forwards to other parts of your brain, where they are processed and integrated with other data (Fig 2). For instance, in the temporal lobe they are combined with information from your memory in order to recognise objects and faces1. In the parietal cortex they are combined with other sensory input to determine where the item you see is located in space and in relation to other objects. Also, it is here that your brain determines if what you are seeing is important. If it isn’t, then you automatically direct your attention to something else, and further processing of the original object of focus stops. If what you see is important, then you must decide what to do about it. For this, all the information is combined in the frontal cortex. Signals can be sent out from here to the premotor and motor cortex in order to take action.

Seeing with your mind

When you see with your mind’s eye, the entire process goes in reverse order. It starts with what I have to do if I misplace my iPhone; my frontal cortex “says” to search. I walk through the house, not physically but in thoughts. My temporal lobe comes into play for the identification of my phone. Should I look for it in my study? With the help of my parietal cortex I know that I won’t find it there, because I haven’t been there in the past two days. This information came from my autobiographical memory.
Therefore, seeing with your mind’s eye begins in the frontal cortex and from there on you use areas of your brain which lie progressively further behind. The rearmost area – the primary visual cortex – was not used when I looked for my iPhone. That is only required when you need to see something highly detailed with your mind’s eye, such as all the specifics -the edges, the controls- of the phone. Seeing with your mind’s eye is usually fairly vague and hazy. Try to retrieve something in your memory which you can visualise, such as a room in your previous house which you were very familiar with. And now concentrate on one object and try to get all the details in sharp focus. This attempt usually only meets with moderate success.

People without a mind’s eye2

But there are people who are completely unable to do this! They cannot see with their mind’s eye. When you ask them what they see when they remember things, they answer: ” nothing”. They do know that room in their previous house and have recollections of it, but without images3. I cannot imagine how that can be, because I need those images. If my wife asks, “do you remember that restaurant beside the museum in Assen?” I search for images in my memory. And if I cannot find these, then no memories resurface. But if she then says, ” ….with the staircase through the middle…” then the images come back and I see where we sat and perhaps even what we ate.

A test: how good is my mind’s eye?

You can test how well you can see with your mind’s eye; see the links to the Vividness of Visual Imagery Questionnaire (VVIQ) under references4. The scoring lies between 1- a very powerful mind’s eye – and 5 – an obviously missing mind’s eye. Average scores lie between 2 and 2.5. My score is 1.7, which means that my mind’s eye is quite strongly developed.

In 2015 an article in the popular press set off a wave of realisation for hundreds of people that they did not have the faculty of a mind’s eye. Before this, most of them thought that this was normal5. The authors of this article interviewed two thousand of these people and discovered interesting features of people without a mind’s eye. It was already known that most of them see images in their dreams. So in their dreams they could see that staircase and the food in that restaurant in Assen. Watkins, a physicist who also lacks a mind’s eye, describes his own experiences and also quotes Oliver Sacks. He too did not have a mind’s eye, but Sacks once used amphetamines to help him conjure up images. Amphetamine can provide the experience of a mind’s eye if you lack one of your own:
“I … could hold very accurate and stable visual images in my mind and trace them on paper, as with a camera lucida. … My enjoyment of these newfound powers … was mitigated, however, by finding that my abstract thinking was extremely compromised.”

Abstract thinking and the mind’s eye

I can’t do without my mind’s eye for my neuroscientific endeavours. As I describe brain areas as above, I see them in my mind. Mathematics plays an important role within the neurosciences. I usually skip these articles, because I understand nothing of this. Abstract thought and a powerful mind’s eye apparently do not make good bedfellows, as Oliver Sacks also experienced.
Watkins describes yet another characteristic: a severe limitation of autobiographical memory, known as SDAM (Severely Deficient Autobiographical Memory). While he does have early memories, they are much more vague and less detailed than people with a mind’s eye. And he finds it difficult to imagine his future.

People with a super mind’s eye

The reverse is also possible: people who experience almost everything in vivid images and moving pictures. They often are not very good at abstract thinking. And as you might have guessed, these people are often creative and artistically inclined. There must be differences in brain dynamics between people without and with a highly developed mind’s eye. But this has not yet been found.

For me, the moral of this story is that one should be careful not to assume that everyone sees their past or future in the same way as I do. What’s more, this difference in degree may apply to almost every aspect of thinking.

Koenig-Robert R, Pearson J (2021): Why do imagery and perception look and feel so different? Philosophical Transactions of the Royal Society B: Biological Sciences 376:20190703.

2 Comments on “Seeing with your mind’s eye: not for everyone”