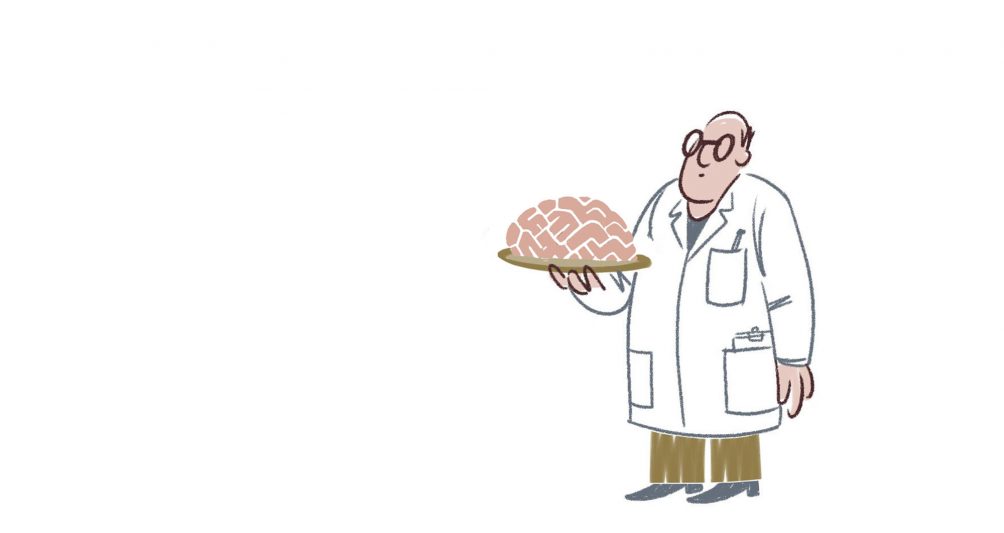 I am not good at recalling names, and never have been. When I was in my thirties I had a research colleague whom I met daily. Every day I would make an effort to recall his name on the way to the lab, to avoid the stilted silence after “ Hallo…”. I am now 71, and this problem has been worsening rapidly in the past few years. Is my brain not working as well as it did? Is it dementia? Or does everyone have weaknesses that get progressively worse as you age?

What happens when you meet someone and greet him by name? You recognize his face and dig up the name that belongs to that face. You do the same with an object: you recognize the object and dig the name up: “chair”. Where in the brain is the memory for names of people and things located? The unexpected answer is: everywhere and nowhere. There is no separate area of memory for names. These are located all over the brain, associated with the people or things they name. The problem is not that these names are missing from my brain, but that I cannot produce them after recognizing a face. And that can extend to difficulty with combining a name and an object: what is that thing called? This problem is known as word selection anomia, and affects a lot of people.
Is there a specific part of the brain that does not work, perhaps even damaged? I have always been good at recognizing faces and still am. For this, a specific temporal lobe area is essential1. The part of the temporal lobe just above this area is crucial to the linking of a name to a face.

Abnormalities in the temporal lobe?

On fMRI scans you can see abnormalities in that part of the temporal lobe in people who have difficulty with putting a name to a face. The same brain areas are also essential for recognizing and naming things, but much fewer people have problems naming things. That is probably because we have to distinguish between so many faces which resemble each other and which are associated with arbitrary and unique names. Putting a name to a face therefore taxes the brain more than putting a name to an object.
For most people the left temporal lobe is more important than the right as regards the linking of a name. This can be understood if you know that the language centre  is located in the left half of the brain, because you need language to name a name. Is part of my left temporal lobe damaged? And has this any relation to the start of dementia, or Alzheimer’s disease? This could be so, because Alzheimer’s disease probably starts in the temporal lobe.

First, a little more about symptoms of Alzheimer’s disease. In the later stages, by which time it is clear to everyone that a person has dementia, there are problems such as not being able to recall life events, not knowing how to use objects, not recognizing people, leaving the stove on. Early dementia is however very difficult to identify. The Dutch Alzheimer Foundation’s website says, ” You are about to call someone, but forget who you wanted to speak to. Or you have difficulty finding the right words or names. As people grow older, they get more forgetful. Usually this is of no significance. But sometimes problems with memory are the first sign of dementia”. Then you can do a test which provides a general indication about your memory. Tests in English can be found here, but the UK Alzheimer’s Society website says: “If you’re worried about your memory, or about someone else, the first thing to do is make an appointment with the GP.”. A self test can be useful, but whether isolated or mild memory problems are a precursor of Alzheimer’s is not clear. This is why brain scans are sometimes used to check if there is something going on, but even these are of limited to no predictive value2. We know very little about how dementia begins, and what causes it. We know only too well how it ends.
What does my increasing difficulty with names signify? Perhaps a part of my brain is not fully developed. And it can be an isolated problem which gets more pronounced with age, but does not spread to other areas of memory. There are several kinds of isolated language and speech-related problems known to us. Dyslexia, for instance, can be a severe handicap, but mostly limits itself to reading problems without any relation to intelligence, aging or other functions. And I know somebody with inherited dysorthography. He cannot spell well, but that is the only problem, and he is highly intelligent.

On fMRI scans you can see temporal lobe abnormalities in people who have difficulty putting a name to a face. Is there a problem or abnormality in my temporal lobe? Not necessarily, and this brings us to a weak point of fMRI as diagnostic tool. Consider for a moment that my inability to remember names might have to do with a completely different brain area, such as the language centre. If asked to name a person, I would naturally not be able to. In this case there would also be an abnormality visible in the temporal lobe in the region where names should be linked to faces. That is because there is nothing to link, because another brain area fails to provide a name. Although there is nothing wrong with the temporal lobe, it will show abnormalities on fMRI.

Am I getting dementia?

I have problems putting names to faces. In Alzheimer’s disease this is one of the early symptoms. But that also holds for recognizing faces and remembering (recent) events. And I have absolutely no problems in these areas. My conclusion: if I were to be developing dementia, then not being able to put a name to a face would be an early sign, but if I were not dementing then it is not an early sign.

Strikwerda-Brown C, Grilli MD, Andrews-Hanna J, Irish M (2019): “All is not lost”—Rethinking the nature of memory and the self in dementia. Ageing Research Reviews 54:100932.