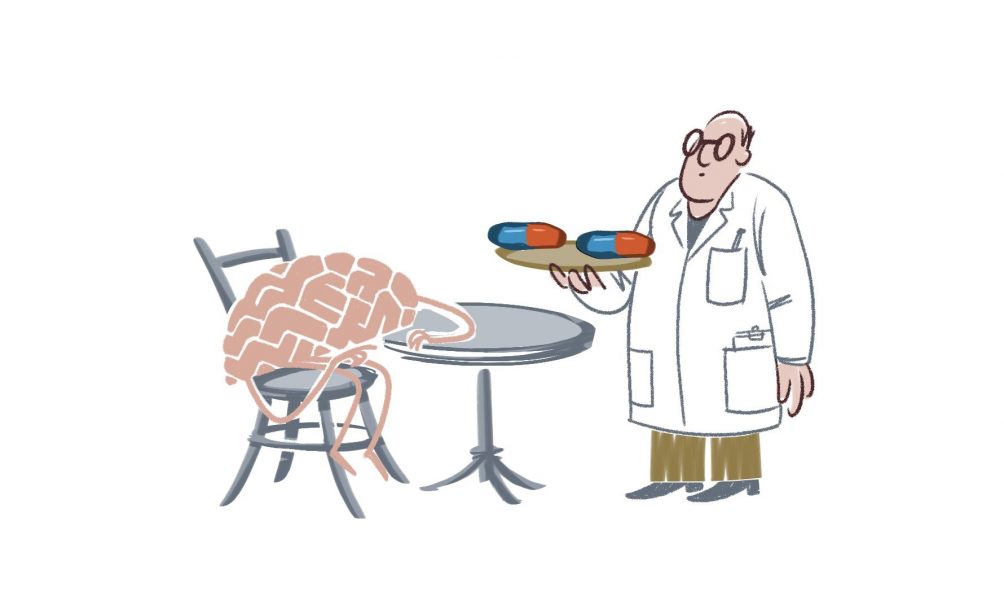 Verrucas disappear after application of a coloured liquid, asthma improves with placebo inhalations, depression lifts with placebo pills, severe post-operative pain decreases with placebo injections, joint pain disappears after a placebo operation. All these placebo effects are published in scientific articles. And one can see changes in the brain after placebo use. How can all this happen after a fake treatment?

What is a placebo tablet?

But what is a placebo? Let us first confine ourselves to placebo pills. One definition is: an inactive substance such as calcium. But this is not really possible, because there are no substances which have no effect on the human body. Therefore, an inactive substance does not exist. There may well be substances with no known effect on the illness which we are investigating or treating. Might calcium have an effect on depression or pain? Not very likely, so if an antidepressant or painkiller is replaced with calcium then we probably have a reasonable placebo. But is this true for osteoporosis? Possibly not. Or for heartburn? Certainly not, because some antacids use calcium as an active ingredient.
So THE placebo tablet does not exist. “Placebo tablet” does not refer to the properties of the tablet, but to a lack of something: the absence of an active ingredient. But if a placebo is to have an effect, then something else must be working, other than the missing active ingredient.

How does a placebo work?

How does a placebo work? A much-quoted explanation is the effect of a positive expectation. A doctor offers a pill and the patient expects that this will aid recovery. Patients indeed recover better in proportion to the degree of positive expectations which the doctor has raised. An extension of this is the added effect when the placebo is prescribed by a devoted, empathic doctor1as compared to a cold and unengaged practitioner.
And there are other effects which appear after a placebo pill, such as spontaneous recovery. A good example of this is the practice of removing adenoids in three to four year olds. This was a common practice in the past and seemed to help. These days we know that the tendency to infections and colds in these children often resolves around the age of four. Removing the adenoids at this age is useless, even though many children are better after this. Spontaneous recovery can occur in the course of almost any disease, but the more serious the illness, the less the chance of spontaneous recovery. With diseases where this happens very rarely, spontaneous recovery is seen as a miracle.
Effects of positive expectations or spontaneous recovery of course do not only play a role in treatment with placebo, but also with active treatment. But you only can observe this if you do away with the active treatment, such as in a placebo-controlled experiment.

What happens in the brain after placebo is administered?

But how can one explain the very specific changes observed in the brain after the administration of placebo pills or placebo treatments? When there is a change in the person – behaviour, emotions, perceptions – then there is a also a change in the brain. Therefore, if one feels happy because he is less sick, or can walk around easily, or there are other improvements, then there are visible changes in the brain. The changes can be more specific. The neural circuits for pain, for instance, are known, and these circuits respond when one is given a painkiller. The same circuits respond if one has less pain after a placebo treatment. Some researchers say that this circuit then shows the effect of the placebo. But that is unfounded. This finding merely indicates the reduction of pain, irrespective of whether this is brought about by painkiller, placebo or something else. Just as specific changes take place in the brain if one is less depressed, has less trouble with indigestion, whatever the cause for this may be. If the symptoms change in a patient, then you can find changes in the brain without knowing what the cause is2

Placebo is not a sham treatment

All that we can conclude from this is: the word “placebo” is used to draw a distinction between the effects of the intended, primary treatment and other effects. But THE placebo effect does not exist and therefore cannot as such be subjected to investigation. What can be investigated is the effect of various secondary or unintentional interventions. This can only be investigated per disease, disorder or symptom. Because creating positive expectations does work to a certain extent with some mental illnesses, but not with cancer. And having an empathic doctor works positively with many patients, but not with a patient under anaesthetic.
The placebo effect does not exist and so it cannot be researched. If you investigate the placebo effect in a particular disease, then it is only useful if you ask yourself what causes this effect. The relevant question with all the articles about the placebo effect is: what gave rise to the unexpected or unintended effect? The answers can vary widely depending on the case: chance, spontaneous recovery, attention, positive expectations, an unknown factor. And mostly it will be a combination of these factors. This knowledge is of great importance in the treatment of patients. A doctor should naturally – in addition to the “ primary” treatment – do their best to improve the chance of recovery: console, reassure, explain, warn, support. Doing this well with each individual patient is an art in itself. That is not a fake treatment, but the very opposite.

Gomez-Marin, A. (2017). Causal Circuit Explanations of Behavior: Are Necessity and Sufficiency Necessary and Sufficient? In: Decoding Neural Circuit Structure and Function. A. Çelik and M. F. Wernet (Eds.). Ch. 11: 283-306.