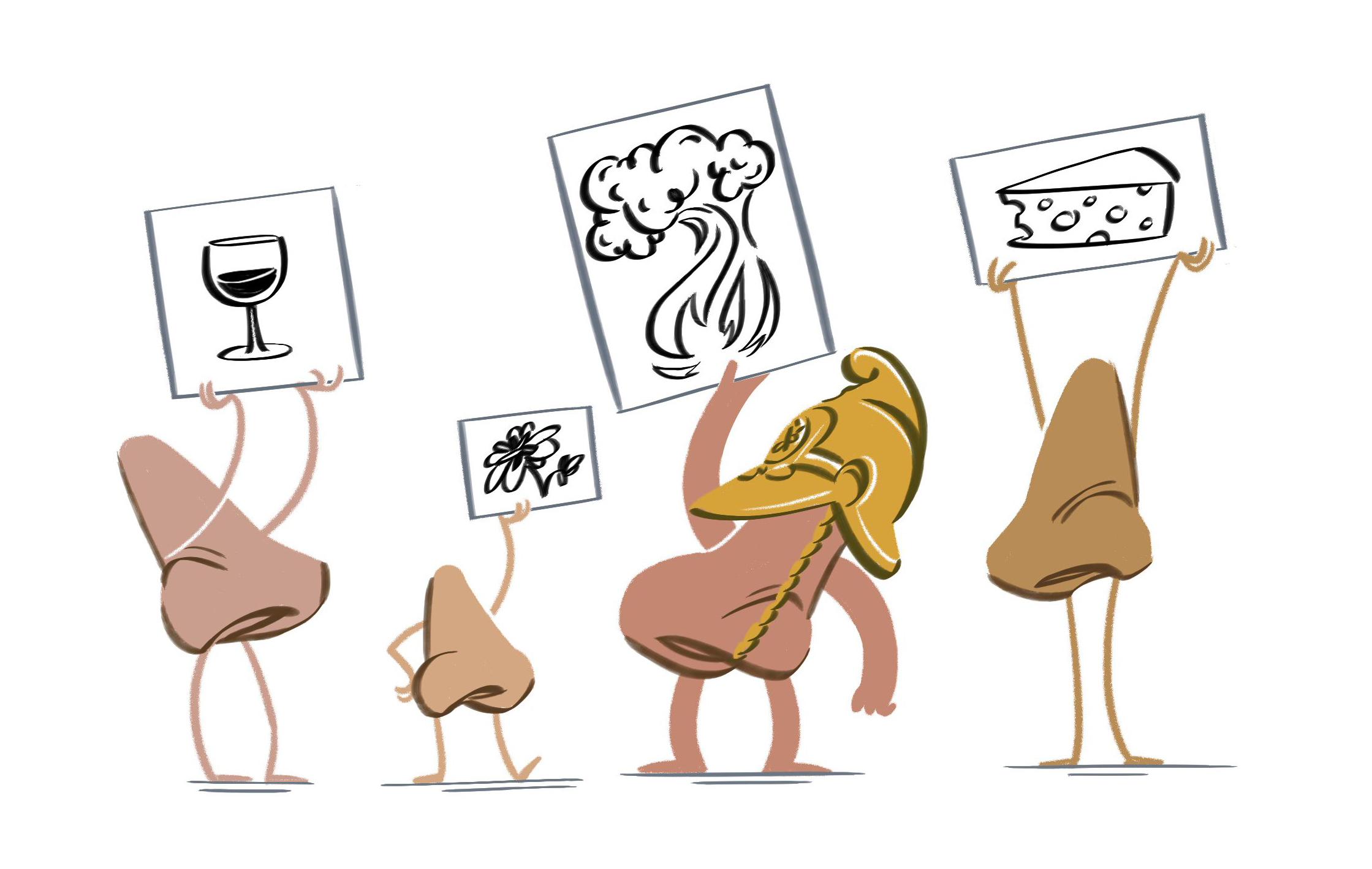 Every so often my wife asks me if I notice a particular smell in the house or garden. I can, when asked, often detect an odour, but I seem to have a much less sensitive nose than she does. I do however like a good red wine with an earthy bouquet. Each bottle I open has an unusual combination of such aromas. My wife often cannot detect the differences in smell between these wines. Does that mean that I have a more delicate sense of smell after all?

Your olfactory organ is a very special sensory apparatus. Everyone will in fact be aware of this, because we all have at some point had an exceptional smell-related experience1. I have on occasion walked in somewhere and been immediately reminded of my grandparents’ living room. This came about from the way the place smelt, although I could not tell you what the smell in question was. The experience was not particularly pleasant, because I do not have exceptionally happy memories of my grandparents’ living room.
We are able to distinguish between thousands of substances. This is important, for instance for us to be able to differentiate between a poisonous and an edible substance, or something associated with a predator or a sexual partner. In addition, your olfactory organ has to adjust rapidly because animals and plants regularly synthesize and express new scent compounds. Sometimes these compounds are almost identical in their chemical composition, but belong to very different animals, flowers or fruits. We can distinguish between the odour of these substances by their unique pattern of receptor activation (see fig. 1).

The olfactory experience begins with the activation of receptors in your nose. These receptors are located in the mucous membrane high up in your sinuses, on neurons that travel straight into your brain through openings in your skull to enter the olfactory bulb (see figure 2). The signal passes directly from here to the amygdala and hippocampus, and to the hypothalamus. This is exceptional, because the signals from other sense organs, such as the eye and ear, travel first to the thalamus, which acts as a sort of filtering station. Because they bypass this filtering station in first instance, smells are able to elicit uncensored emotional reactions (via the amygdala), and immediately activate both memories (via the hippocampus) and hormonal reactions (via the hypothalamus).

Your nose has yet more surprising properties. There are some 350 different olfactory receptors found in humans, with which you can in theory differentiate between more than a billion ( > 1,000,000,000) different scent substances. But nobody has all these 350 receptors. In a study of 26 people, a total of 273 distinct receptors were found, but only 90 of these were present in all twenty-six participants. This partially explains the variation in different people’s capacity for detecting smells. I really enjoy eating white asparagus (a speciality in the Netherlands), but there is a downside: the rather penetrating smell they impart to your urine. It turns out that more than half the population cannot smell this because they do not produce the particular receptor for sensing this odour.
Therefore, you have only a limited number of all possible receptors in your nose, and what’s more, you don’t always have the same receptors. Situated on each neuron in your nose is only one sort of receptor, and this neuron only lives for 30 to 60 days. The neurons are continually being replaced by new neurons, but not with the same sort of receptor. If you have not smelt certain substances for a while, then the receptors for that substance disappear. This means I have to drink vintage red wine frequently to be able to retain my appreciation of those delicious aromas. Some receptors however stay permanently. I do not know if that is so even if the corresponding smell is not always available, or because some smells are always present everywhere. As you age, your capacity for smell changes. Some olfactory receptors are no longer produced by most people in old age, but there are other receptors which appear more often in the elderly.

What you can smell keeps changing

Sex differences also play a role in smell. Smells resembling those of androgens or male hormones are more easily detected by women, and more often found to be pleasant. You might think this has to do with pheromones, substances which in many animals have a function in attracting the other sex or in demarcating territory. Pheromones are detected via the vomeronasal organ which is a part of the olfactory organ. But that component organ is absent in humans, so we are unaffected by most pheromones
What you smell and can smell changes constantly and quickly. Much more than what you see and can see. This ability is facilitated by the ongoing replacement of olfactory neurons which degenerate every 30 to 60 days. But higher up in the brain these scents sometimes remain indelibly stored for a very long time. That is why I can recall my grandparents’ living room. But do I remember what I smell? You can’t really call it that, because what I recall is a memory with emotions which are activated by what I smell. I can smell a memory, as it were, and not a substance.

What you smell reflects your tastes

That is probably the answer to the question of whether my wife or I has the more sensitive nose. It is not only about our nose, about having more or different receptors there, but mainly about which experiences we have or find relevant. My wife is more focused on what goes on in the house or garden, and I am more interested in good food and good wine. Therefore, an odour is only characteristic of a substance when taken in combination with the person who smells it
So tell me what you smell, and I will tell you who you are!