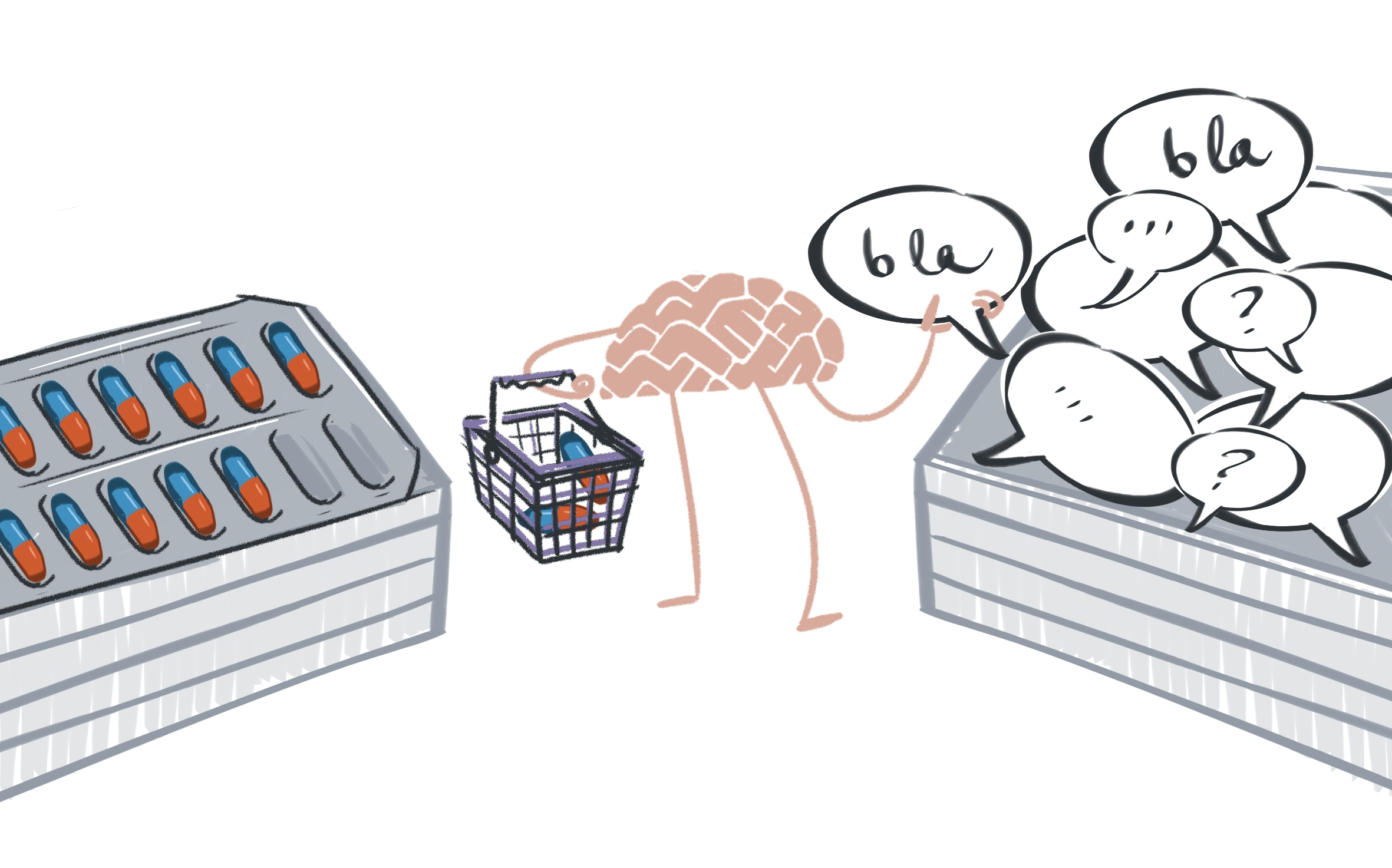 “but I didn’t believe in a pill. I wanted to feel better and change things, but I wanted to do that on my own strength.” “ I didn’t want to turn into a different person; I was afraid of that”1. Statements by people with depression who did not respond to psychotherapy but later recovered after using antidepressants. A lot of people find antidepressants to be worthless. And the media are usually very eager to draw attention to reports about antidepressants not working or having terrible side-effects, while similar reports regarding psychotherapy are ignored. Why is this so? Is psychotherapy better than antidepressants?
A disclaimer before I proceed: I do not personally hold psychotherapy in disregard; in I have benefitted from it myself. However, this post is about the question of why people believe automatically in psychotherapy and not in antidepressants.

Antidepressants are effective and have side-effects, psychotherapy too?

Is it then not true that antidepressants hardly work? No, that is not true. To explain this in a balanced way I have to not only present evidence to support this claim, but also contradict articles which claim that they rarely work. To do this I would have to write at least half a book. I think that is too much for this context, so I will make do with a statement. Antidepressants are extremely effective for depression, but not for everyone with a depression. Most studies select patients with depression who have little chance of benefiting from an antidepressant and a high chance of responding to a placebo. In such an experiment you obviously see little effect of the medicine(s) being tested.
And then there are the side-effects of antidepressants. They are not to be trifled with. But are nausea, reduced sex drive, dampening of emotions, suicidal thoughts, more frequent than with psychotherapy? No one knows, because these aspects of psychotherapy have not really been looked into properly. And does psychotherapy really work? An antidepressant is assumed to be effective only if it has been shown to be better than placebo in a placebo-controlled clinical trial. There are as yet no placebo-controlled studies of the effects of psychotherapy, so the question of efficacy of psychotharapy is not easily answered either.

You understand psychotherapy, but not antidepressant therapy

And yet these statements about the efficacy and side-effects of psychotherapy usually elicit a lot more resistance and disbelief than with antidepressants. Why is this so? I think it is because you are not consciously aware of how an antidepressant works. Humans do become aware of many processes in their brains, such as actions, thoughts and feelings. I felt like having a sweet a moment ago, knew I had some in the house, got up and fetched one. I now think about this post, decide to use that as an illustration and feel satisfied about it. I experience all this consciously. When you take an antidepressant, this is absorbed into your bloodstream, transported to the brain, and it works there on cells and neurotransmitters. If you are lucky your depression clears away after a while. But you feel absolutely no connection between what happens there, and also not with the fact that there is a causal relation between those cells and neurotransmitters and the change in your mood. In Cognitive Behavioural Therapy (CBT), the most commonly used type of psychotherapy for depression, a therapist talks to you, points out what goes wrong in your ways of thinking and how you can practice to get rid of this. If you are lucky your depression clears away after a while. You are aware of a lot of this and see a causal relation between what the therapist said, what you did and that your depression lifts.
I have heard people say they feel down or see no future, but never that they feel that their serotonin is low or that the emotional circuit in their brain is disfunctioning. These events at molecular and cellular level that underwrite our conscious experiences are hidden and invisible to us.

Antidepressants and Cognitive Behavioural Therapy do the same

Now comes the surprise. When your depression clears away, then that happens due to the same processes in your brain whether you have used an antidepressant or CBT for this. For instance, there is growth visible in the hippocampus. Cells there form more branches, a process that is inhibited during a depression. Rumination and negative thinking decrease as much with antidepressants as with CBT. The changes in your thoughts and the changes in the hippocampus are directly related to each other. Thus, antidepressants and CBT eventually do the same things, if they work. These effects are brought about by different routes in the brain: with CBT first through talking and conscious actions and then through effects on serotonin and growth hormones. With antidepressants directly through effects on serotonin and growth hormones. It appears that these two methods of treatment enhance each other, although there is little strong clinical research on this. I think that you learn with CBT how to recognise and deal with negative thoughts, and that antidepressants increase the flexibility of your brain in learning to do this. The use of antidepressants in isolation is often insufficient, although this often happens. You need to use the increased flexibility by learning how to deal with depression. But psychotherapy alone is often not enough either, because the brain loses its flexibility after being in a depressive state for long enough. This is why I find it strange that most often a choice is made for either antidepressants or psychotherapy.

Cuijpers, P., A. van Straten, et al. (2010). “The effects of psychotherapy for adult depression are overestimated: a meta-analysis of study quality and effect size.” Psychological Medicine 40(02): 211-223