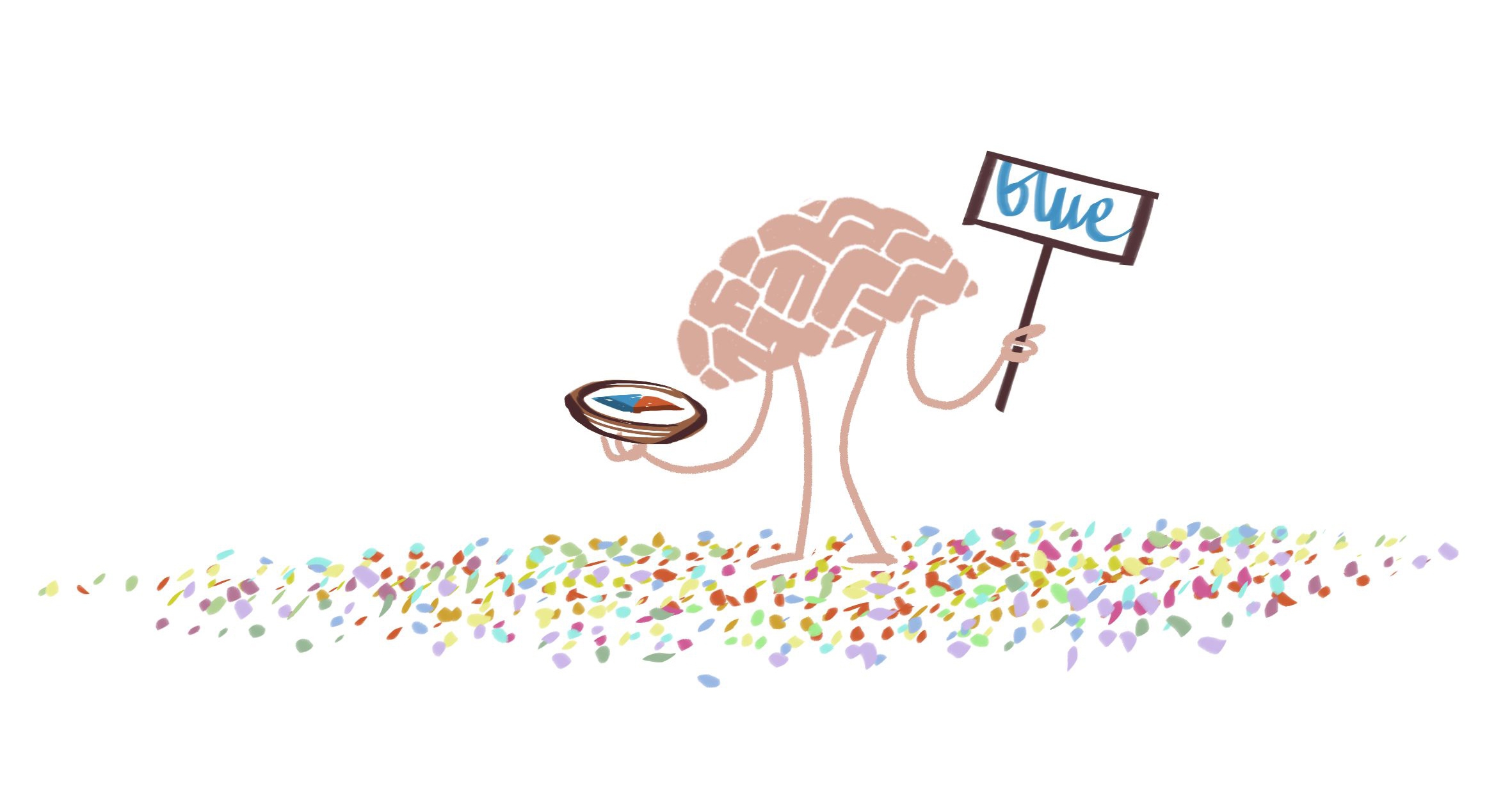 Previously published on 15-2-2018; the text under “Wavelengths are objective, but colours are not” has been revised. Comments relate to the previous version.

Most people experience the world as being full of colour. This is the effect of partial reflection of sunlight by objects. Sunlight itself is white: it consists of all the wavelengths of light. Cornflowers reflect light waves with a wavelength of around 450 nanometres (nanometre = one-billionth of a metre), so they have a distinctive colour. Our eyes are so designed that they perceive differences in wavelength. To this purpose we have cones in our retina, as well as rods, which are not colour-sensitive. When the cones are stimulated, then the neurons linked to them transmit electric signals to the visual cortex in the brain.

What’s in a name?

All this sounds rather specific: wavelengths which are perceived in the eyes and transmitted as electric signals to the brain. But the colour that we see and register consciously is not as specific. My wife likes combinations of green and blue in her clothes, furniture and quilts. Some people find that these colours do not go together or even that they clash. Perhaps she sees them differently. That might be so. I might mention a blue coat, and she does not know what I mean. Until she understands that I am talking about that green coat. This naturally is the case when the colour falls between blue and green.
How you name colours is not only important for communicating and preventing misunderstandings. Lera Boroditsky and her co-workers, who study the influence of language on our thought, demonstrate this. In Russian the colour blue does not exist, but two colours, represented by the words “goluboy” for light blue, and “siniy” for darker blue. It now appears that Russians can more easily distinguish between two fairly similar shades of blue if they happen to fall into different categories – one “goluboy” and the other “siniy” – than if they belong to the same category. But if they simultaneously have to repeat words representing numbers then that advantage is lost. In that situation they are not able to use -in their mind- the words for the two shades of blue. Therefore, only if they are allowed to use the different words, then they can more easily distinguish different shades. This means that the names we give colours can influence the subjective experience or interpretation of colours.

Wavelengths are objective, but colours are not

Even the way we see a colour is not objective. That is most clearly illustrated by a hype on internet in early 2015 around “The Dress”.

I don’t know what you see. I see a blue dress with black stripes. But a lot of people see a white dress with gold stripes. How can this be? How we see a colour depends on the lighting. This is not surprising, because the colour of an object is determined by the reflection of the light that falls on it. In the previous version of this article, I wrote that people who assume that the dress is illuminated by natural light outdoors see it as white and gold, while people who assume that the dress is illuminated by artificial light indoors see it as blue and black. Research since has shown this explanation to be too simplistic. Because, if you visualize the dress outdoors and assume the photo to be taken in full sunlight, then you see it as blue and black. Whereas you see it as white and gold if the sun is behind the wearer, that is, if you see the dress in the shadow.
But why does the one see the dress as shown here in different colours than the other? Because you can’t tell from this photo where it was taken. This means that our brain does not have enough information to know how it should see the dress. In such cases our brain fills in the gaps of uncertainty. This happens on the basis of assumptions, in this case regarding the lighting. These assumptions vary between individuals. You can also put it this way: your perception of colour rests on presumptions. What is also interesting is that your brain chooses blue and black or white and gold, and nothing in between.
This photo of The Dress became a hype because it is unusual that people vary so much in their perception of the same wavelength. We usually have the same preconceived notions!

The colour of cornflowers, with which I started off, will seldom give rise to a discussion, even if they are set in a vase indoors. Well then, are cornflowers blue? You cannot just say this. Cornflowers mainly reflect 450 nanometre wavelengths from white light. We sense these with our eyes, but only link this with the word blue much further on in our brain. The dress reflects light around 450 nanometres, but some people call that white. In figure 2 the sensitivity of the cones and the corresponding wavelengths and colours are named as a given, but this is not really correct.
Some philosophers therefore say that colour does not exist objectively. That is again an exaggeration, because there is a clear distinction between the wavelength of one stripe on the dress with the next. That is objectively measurable, whether you call them white and gold or blue and black. And how you name a colour determines how you treat the colour: Russian or Dutch. Perhaps it is best to say that differences in wavelengths exist, and we name these as colours. Subjective factors plays a role in that process of naming. So, what is colour?