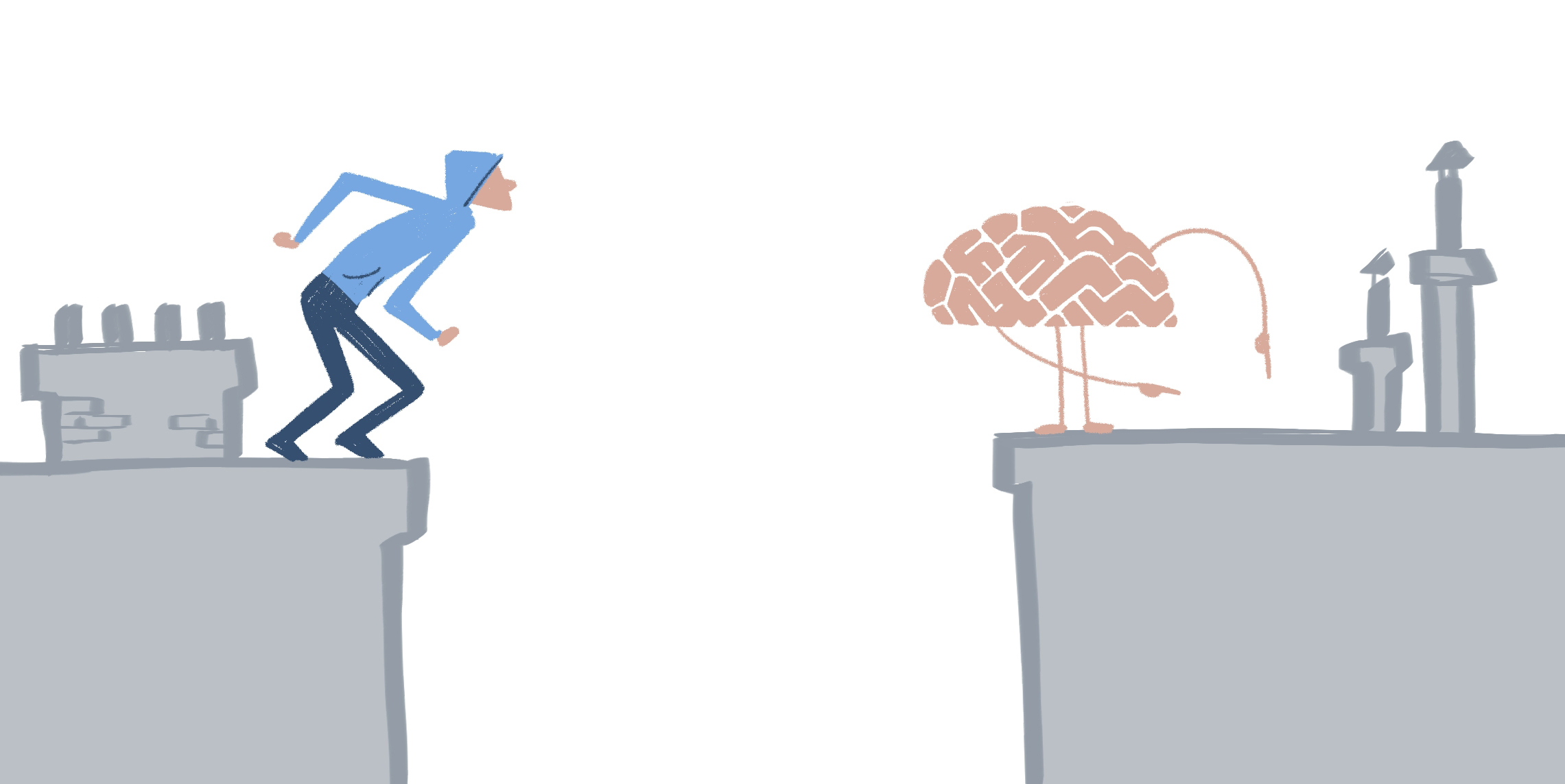 Take a look at this video of free runner Philip van Ees:

The interviewer says at the start, “ It appears that Philip van Ees and I Iook at the world in different ways”. Towards the end of the video he asks, “ You see at once: I can take that jump?” Philip van Ees replies, “ Well, not when I am standing here. Then I walk over to take a look, and at the moment I am there, standing in front of it, I know what to do. I don’t have to measure anything. I know intuitively exactly how far I can jump”.
How does he do this? With each jump, he has to know within a fraction of a second what to do, because you see that he takes several jumps in succession. Could he be subconsciously working out his next jump even as he is busy running and jumping? What would then be going on in his brain? He looks at the obstacle he has to take next. The signals are transported from his eyes to the visual cortex, right at the back of his brain, where they are processed. Then they are combined – in other parts of his brain – with information about the position and motion of his body, and his muscle condition. This information is now transported to the premotor cortex, where the action is pre-planned, and then on to the motor cortex from where his muscles are directed. This would all take far too long. Knowing intuitively how far he can jump comes about in a very different way.

A model of the world in his head

Philip hints at what is happening when he replies to a question with, “ …..then I go and stand here, and at the moment I am here, standing in front of it, I know what to do”. What does he do when he goes to take a look? Develop his feeling for the jump. But that is an explanation that does not satisfy me as a brain explorer. The interviewer says at the start of the first fragment, “ It appears that he looks at the world in a different way than I do”. And that is the literal truth.
Each one of us has a model of the world in their head. But that model differs among people. How that model looks depends on what you are capable of doing with it. That model directs Philip van Ees’ muscles just as a projector runs a film. What he is about to do is already determined in advance, just as what is going to happen in a film is determined in advance. But why then did he go to look at the obstacle beforehand? Because his model was not yet accurate. After looking, his model was adjusted and he knew how to take the jump. He says “Then I know what to do”. In fact, he did not yet know how he would jump, but he did know that it was assimilated in his model in a way that he could rely on. That is what it means to know intuitively how he would have to take the jump.

Everything we do instinctively, perhaps everything we perform without conscious effort, we do on the basis of this sort of model. This realisation is a revolution in science, it sheds a total new light on what we thought we knew about how our brains work. Until recently we thought that everything begins with perception, seeing what there is, processing that information and acting on the basis of that, as I described in the beginning of this article. It turns out however to start with the model in our head.
There is one essential difference with the image of a projector and a film. If Philip van Ees’ model of the world directed his muscles the way a projector runs a film, then he should be able to negotiate the whole course with his eyes shut. But that is not so because the unexpected can happen, things can turn out to be slightly different to what his model predicts. The distance to the following object can be a little longer than expected, the track can be more slippery. Then he has to adjust his model on the run. And for this he needs his perception, so his eyes need to be open. As soon as it is apparent that his perception differs from the model in his head, split second adjustments take place in his model. That can happen at speed because he does not have to adjust all the information, only that which digresses from his model. But if the discrepancy is too great, then the chance exists that the adjustment takes too long, and he may fall. The process therefore begins with the model that directs the action, and the perception is necessary only as a continuous check that the model is still accurate, and to adjust it if necessary.
The model of the world within your head is not readymade. It is constructed by trial and error. For this, almost all the components of the brain are involved; the visual cortex for what can be seen, the parietal cortex for perception of space and motion, the somatosensory cortex for sensing the body and its muscles, and the motor cortex for controlling the muscles. It takes a lot of practice to coordinate all these components. The frontal cortex has as it were a coordinating function; you could call it the planning centre. What an exceptional brain Philip van Ees must have, that he can do this, that he has such a detailed model of the world in his head; although he himself may think that it has mainly to do with having an exceptional body.