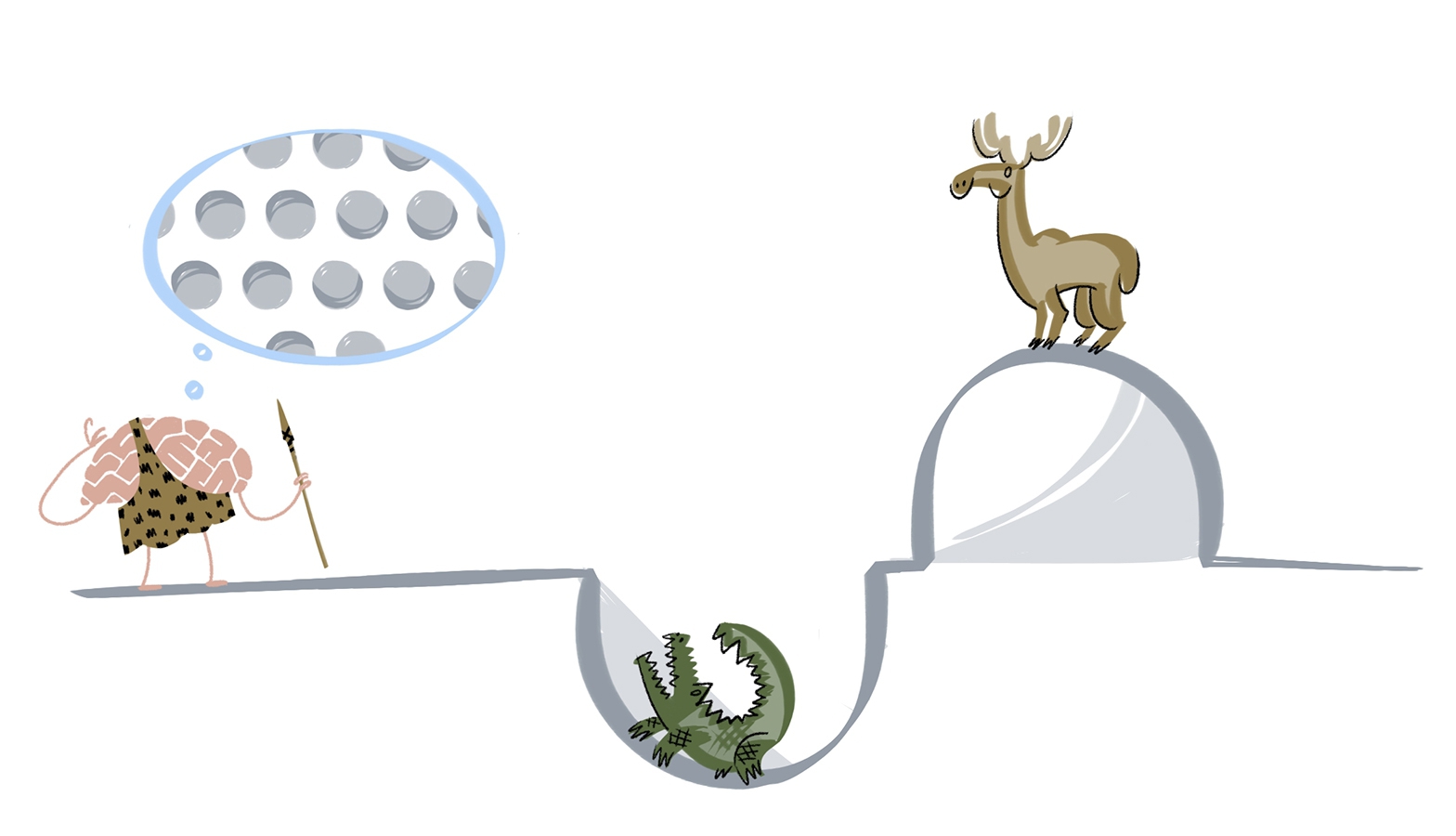 What would become of painters, cartoonists, architects, and engineers if we were unable to visualise three-dimensional objects from their plane two- dimensional diagrams? An amazing feat performed by our brains. Take a look at the following illustration.

You see an area with what looks like marble-sized pits. How is it that we see pits? That comes from the slightly darker shade of grey in the upper part of each circle and the slightly lighter shade below. Our brains interpret this as an effect of light hitting the surface at an angle, the slightly darker grey being a shadow. Thus the circle under this area appears to lie lower. The raised area near the bottom of the circle is lighter because the same light illuminates the edge more directly. This is how our brains see the circles as pits. But now it gets better. We turn the illustration around:

Now the slightly darker shade of grey lies near the bottom of each circle and the slightly lighter shade above. And now you don’t see pits, but little bumps. How can this be? You think perhaps that it is not the same illustration. Then you need to stand on your head for a moment. Or you can print the picture, look at it and then turn it around. Now you see. Upside down, the pits become bumps.

The explanation for these strange blips and dips starts with the observation that we see the flat illustration as a three-dimensional object. It has to be an illustration of something in the real world, and all objects in the real world have three dimensions. Thus our brain makes it into a three-dimensional object.
But why do the dales turn into hills when you turn the page? Because we assume that the light shines down on us from above. In the olden days the sun was the only source of light and it shone from above. Our brains appear to have been programmed this way.
We not only convert a two-dimensional picture into a three-dimensional image, but indeed all that we see is in two dimensions. The “pictures” we see with our left and right eye are two dimensional. From these two 2-D pictures we construct an 3-D image in our brains. But our brains do not construct an accurate image of the reality (See also You look with your eyes, but see with your brain). This is not really necessary and only costs a lot of time and energy. Our brains construct an image that is optimal for our survival. One of the tricks is to assume that light comes from above.

Inborn or acquired: language as an example

In the previous paragraph, I wrote that our brains had been programmed this way. But are we then born this way? Or do you learn to see things this way after birth? All human characteristics are for a part hereditary or inborn, and the rest acquired during life. Nothing is only nature or only nurture. Having inborn reactions to fixed, unchanging circumstances is very functional. Perhaps this also applies to “the light comes from above”. But to survive in nature you also need to be flexible. A good example of this: that we can speak and understand a language is largely hereditary, and strongly related to the formation of the human brain. This is why humans are language-based and apes or other animals are not. But which languages we speak depends entirely on which languages we learn after birth. A child that has been adopted shortly after birth learns the language that is spoken in its surroundings just as well as children who are born there, and independently of the language spoken by the biological parents.

Does the light come from above?

The abovementioned surfaces with blips and dips are illustrations on a plane surface, which means that you have no indication where the light is coming from. So an image is constructed in our brain which is compatible with “the light comes from above”. In the real three-dimensional world, however, the only situation in which you don’t know where the light is coming from is when the illumination is completely diffuse, and therefore coming with an even distribution from all around. The light always comes from all around, even outside when the sun is shining. It is reflected from all sorts of objects. But it is never completely diffuse and never evenly distributed from all around you. It appears that we only need a subtle indication of where the light is coming from to discard the presumption “the light comes from above”. In the real world and daily practice, therefore, it is hardly ever difficult to correctly identify what we see as a blip or a dip.

Experts claim that you can carry out the following exercise. Look carefully at the second picture and imagine that the light comes from below. Then the bumps become pits again. I haven’t managed to see this yet. Zhenya, who illustrates these articles, can do this with great ease. She can make the illustration flip from “blips” to “dips”. So she overrides the default programme just by imagining where the light is coming from. This has to be something related to her visual talent, which in my case is lacking.

Thus, “the light comes from above” is probably inborn, but this has very little significance in our lives, because we usually know where the light that illuminates an object is coming from. What is then the use of the inborn programme in our brain? Is it an evolutionary remnant from more primitive organisms? It would help to answer this question if we knew exactly how our brain processes the vague information about where the light is coming from. Unfortunately we have no idea. Which means we cannot decipher what the roles are of the inborn and acquired in all this. And this holds true for many of our traits. They are all inborn and acquired, but how strongly inborn and acquired is rarely decipherable.

3 Comments on “Let the sunshine in”