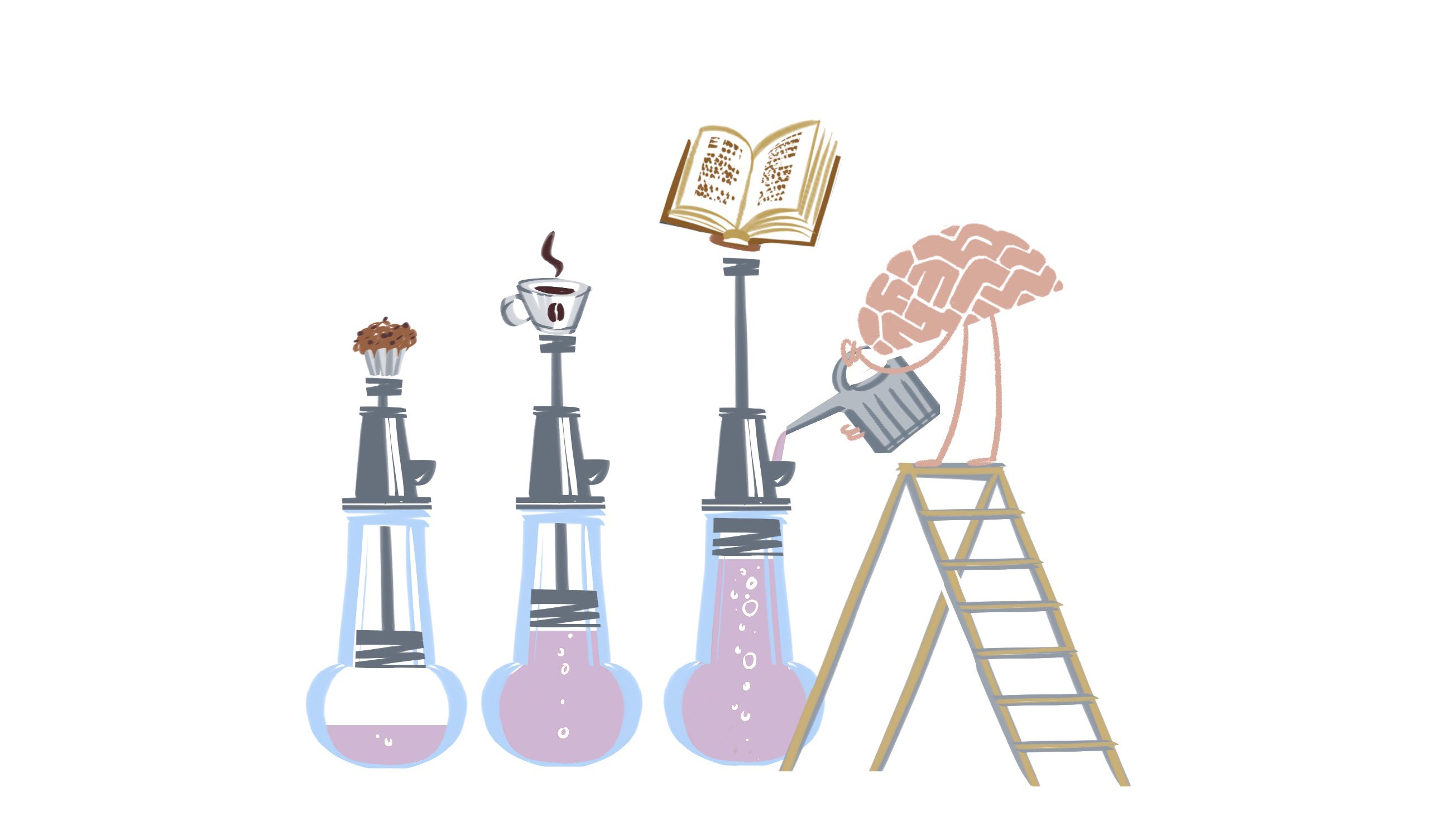 Have you heard of dopamine? It is called the reward hormone, or happiness hormone. I know that dopamine plays a role in Parkinson’s disease, schizophrenia, ADHD and in addictions. Drugs like cocaine and amphetamine work through dopamine and this also is the case with medicines such as antipsychotics and methylphenidate, or Ritalin1. What is dopamine, what does it do and what does Ritalin have to do with this?

Choosing out of a thousand possibilities….

Our brains are perpetually occupied with choosing out of all sorts of possible actions. As I sit here thinking “ What next…” I feel like having a coffee, rise, and pour myself a cup. To carry out that action, my brain has to take a series of decisions. Where did I leave my cup? I know where the coffee pot is. Is the cup full? A bit more sugar there, good. And a lot more of these details to be decided. My cheek itches, should I scratch it? You are probably thinking: what rubbish, this sort of thing just happens by itself! Indeed, most actions happen by themselves, subconsciously, but each time my brain has to decide what is important. There are hundreds, thousands of possibilities playing through my subconscious brain, and choices are being constantly made about which to give priority to in order to be noticed, carried out or thought. And dopamine plays an important role here, as I will now explain.

….. with a little help from dopamine

My cheek was itching. It starts with a signal in my cheek that is transmitted to my brain and processed in particular areas of the brain. Is this an important signal? In order to determine that, information is retrieved almost instantaneously from other brain areas. An itch is always important. The next question is if it is positive to do something about it, such as scratching. To find out if scratching helps in such a situation, information has to be collected from other brain areas. Based on this, a prediction is made in the brain whether scratching will be positive. If affirmed, then information needs to go to the brain areas that control my hand. All this information is coordinated by dopamine. What I have described here is just a small event in my brain, that took place within a second. Within this time a thousand other events like this took place in my brain. And each time dopamine coordinated the signals that were needed to decide, within a fraction of a second, if a stimulus was important and if reacting to it would be positive. Most of these events I do not even notice.
Dopamine therefore does two things in these complicated, subconscious processes in my brain. It manages the process which determines how important something is. If it is important, then predictions are made in my brain about the consequences of reactions to it. In this, it is important if the reaction will have a positive effect, and that label “positive” is also provided through dopamine. You could say that dopamine predicts if a particular behaviour will be rewarded or punished.

In what I have just described, dopamine acts in specific brain areas where the incoming signal is processed, and then it disappears from there within a fraction of a second. That happens in hundreds or thousands of sites, and several times per second. Dopamine also works in another way. The decisions – whether something is important and if a reaction will have a positive effect – have to be balanced. That is to say, the brain must not decide too easily that something is important, but it must not make it too difficult either. The same applies for the prediction about a positive outcome. If these decisions are taken too easily in the brain then it gives rise to a struggle between all sorts of actions demanding priority to be carried out. This results in chaos, half-completed actions and inadequate behaviour. In order to maintain balance, the brain areas involved are bathed in dopamine, and more dopamine is released where necessary if it seems that chaos is imminent. That suppresses the riot, as it were. This is a slower process, as the amount of dopamine in the bath changes in the course of minutes or longer.

…..in ADHD, with methylphenidate

Thus the rapid, local changes in dopamine coordinate the decision over whether something is important and the prediction whether a reaction to it will have a positive effect. Slow and less localised changes in dopamine see to it that those decisions are taken in a balanced, not too easy or difficult, way. In children and adults with ADHD2 this system malfunctions. They cannot keep their attention to a task for long enough, are easily distracted and often jumpy. They often describe things racing inside their head. That seems to me a clear description of the chaos in their heads, and I have described above how that arises. To provide a little more dopamine to bathe the brain may help. Methylphenidate -Ritalin3does precisely this. It is that simple. But methylphenidate resembles amphetamine and to a certain extent cocaine: addictive drugs. Does an ADHD- sufferer using methylphenidate therefore get addicted? The answer is: seldom.

And do you get addicted?

People who use amphetamine or cocaine as a drug, are looking for a quick euphoric effect, a kick, a rush. This requires boosting of the rapid effect of dopamine. How can you bring about a rapid entry of these substances into the brain where they can do their work? By injecting or sniffing large doses. They then wipe out everything that dopamine is doing in the normal, balanced way. Making balanced choices for what is important and may have positive outcomes then becomes impossible. The improvement of attention, concentration, and focus in ADHD sufferers takes place by enhancing the slow effect of dopamine. This is done by methylphenidate, that is taken in the form of tablets, slowly entering the brain where it works for hours. In this way it does not have any euphoric effect, does not give a kick or rush and therefore does not incline towards addiction. Methylphenidate can have an addictive effect if you sniff or inject it in large doses. That does happen once in a while, but according to my information this is mainly done by addicts who have taken it off patients, and seldom by a prescription-holder.

So what is dopamine?

Dopamine regulates the brain in making choices about what is important, and reactions based on a prediction of their positive consequences. To call dopamine a reward hormone is farfetched, and calling it a happiness hormone seems, based on the above, quite misplaced and even ironic.

2 Comments on “Does dopamine make you happy, and is methylphenidate (Ritalin) addictive?”