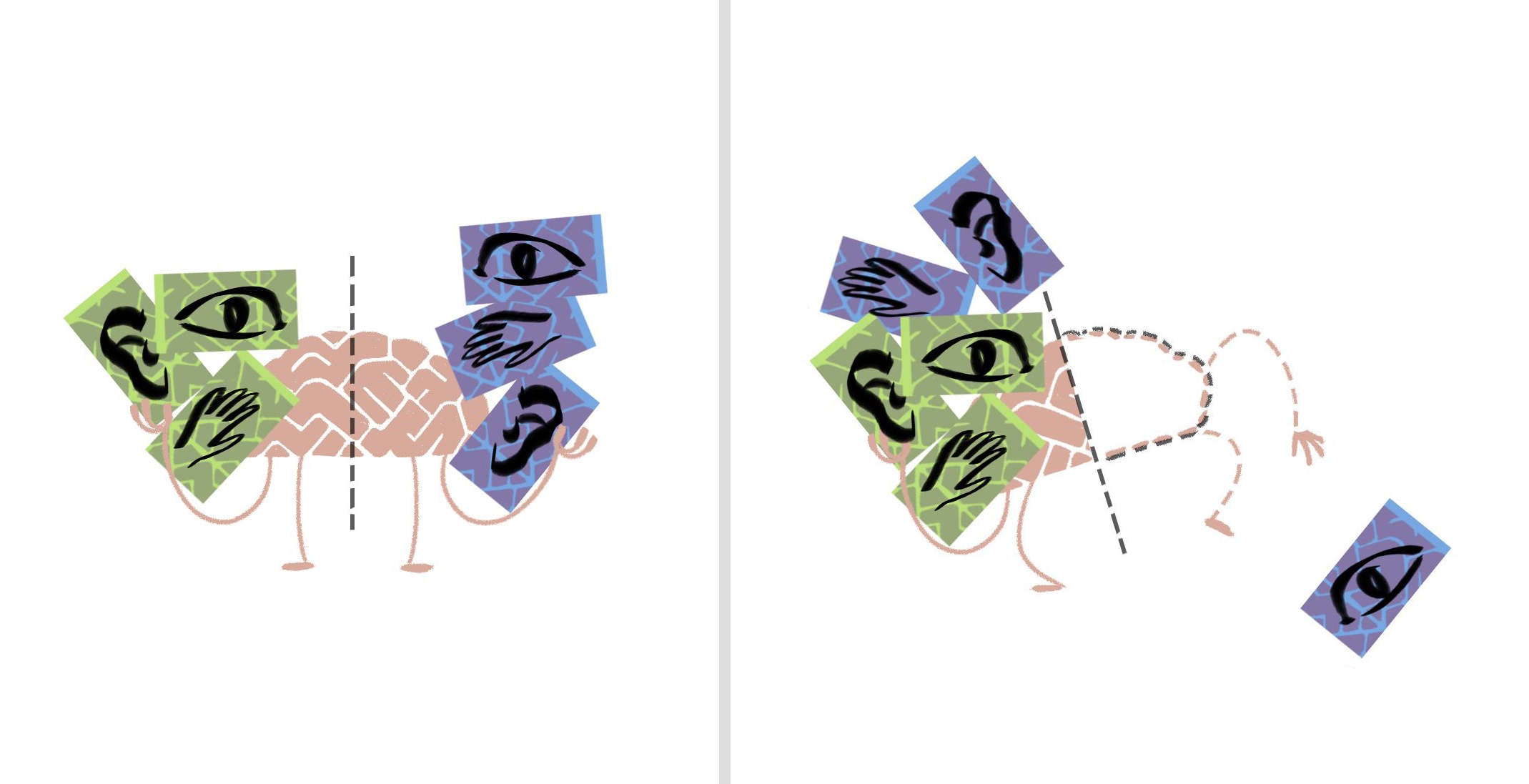 I am inclined towards exact sciences and am not very musical. Thus, the left hemisphere of my brain is stronger than the right. Luckily for me, that sits well with my gender, as men tend to use their left hemisphere more. What do we know about the use and specific functions of the left and right hemispheres? Watch this video about the girl with half her brain.

Half a brain, almost normal

This girl -Cameron- has a rare autoimmune condition that presented when she was three and progressed till she was experiencing very severe epileptic seizures. Her right hemisphere was being progressively damaged by the disease. To put an end to this, when she was six, doctors removed almost the entire right hemisphere of her brain .

She is eight years old in the video. You see her dancing around two years after the operation. Her father says that she is back to her old self. He means not only that she is alive and has no more epileptic seizures, but also that she is now back to the way they knew her before the epilepsy became so severe. You do not see that the left side of her body was totally paralysed after the operation. She has worked very hard in a rehabilitation centre and with her parents to achieve what you see on the video. It looks as if she has recovered completely, but that is a little too good to be true. Her left leg does not function properly (yet), so she wears a brace. She continues to have limited use of her left arm and especially her left hand, and will not recover the visual field in her left eye. In 2015 she was thirteen years old and functioned almost normally1. She is intelligent and does well at school. She wants to be a maths teacher when she grows up. You might think that this is a miracle child, but in the past few years this operation has been performed on a thousand children, including some in The Netherlands. Not all these children recovered as well as Cameron, but in general they function well.
This shows how flexible the young brain is. I have not been able to find out if this surgery has ever been performed on an adult. It is however clear that the younger the child is, the better and more completely it recovers function after the operation2.

What do the left and right halves do?

How is it possible that you can do without half your brain? Some functions are clearly allotted to left or right. Your right hemisphere controls the muscles of the left side of your body. This is why Cameron had left-sided paralysis after the operation. Most of the sensory information from the left side of the body goes to your right hemisphere. This means that the information from your left ear, left eye, but also the skin (touch) from your left side, goes to your right hemisphere. All this information could not be processed after her operation. But fairly soon after her operation her left hemisphere took over many of these functions. How all this comes about has not yet been investigated well enough. But we do know that not everything recovers. The information from the left eye will never be used again.
But what surprises me most is that Cameron is very intelligent, socially adjusted and has, as her parents say, the same personality that she had before the operation, or rather: before the epilepsy had progressed. We think that both hemispheres are required for complex cognitive functions such as intelligence and social behaviour. While it remains true that we normally use both halves of the brain for these functions, it now appears that half a brain can work just as well. I am also surprised that these functions were more or less normal within a short time after the operation. So, the adjustments after the operation could not have been very complicated. One must however bear in mind that one cannot tell how she would have been if she had not had epilepsy or brain surgery.

Left- or right-brained is far-fetched

But now let me go back to where I started. “I am inclined towards exact sciences and am not very musical. Thus, the left hemisphere of my brain is stronger than the right.” I do read here and there that if you are left-brained, you are more rational, analytical, objective in your thinking. And if you are more right-brained, you are more intuitive, subjective, holistic in your thinking. Women supposedly make more use of their right hemispheres and musicality also goes via the right hemisphere. Well, that is not so good for Cameron, being a girl, because she does not have a right hemisphere any more. And naturally she wants to be a maths teacher, because she can use her left hemisphere for that. You understand that I make fun of such far-fetched statements about the segregated functions of the brain hemispheres!
With a normal development of the brain, all sorts of differences arise between the hemispheres. For instance, the left half of the brain controls the right half of the body. Complex functions such as thought, language, musicality or spatial orientation are controlled by both halves working together. Some aspects are executed by the left, and others by the right hemisphere. This is logical, because if both halves had the same function then it would be a waste of capacity, and might give rise to conflicts between the hemispheres. Although there is no fixed division, there is a tendency for some aspects of a task to be processed in the left or in the right halves. When you test this in large groups of people, you do find a difference between the left and right halves. But this difference does not justify the conclusion that a specific function is inextricably bound to the left or right hemispheres. And this certainly applies to broad categories such as rational/intuitive, man/woman, musical/tone- deaf. The brain is very flexible: the task differentiation between left and right hemisphere is under constant revision. The differentiation depends on the task and on the circumstances under which it has to be performed; whether it concerns thinking, language, musicality or spatial orientation. Therefore, my left hemisphere is perhaps not at all stronger than my right hemisphere; what a relief.

Nielsen, J. A., B. A. Zielinski, et al. (2013). “An evaluation of the left-brain vs. right-brain hypothesis with resting state functional connectivity magnetic resonance imaging.” PloS one 8(8): e71275